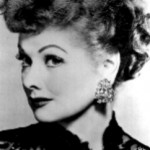 I thought this would be an interesting and fun article to write! I did a lot of research and discovered some very surprising famous people that battled RA most of their lives. I found some of their stories extremely uplifting and incredible. Regardless of their pain, they went on to be successful individuals, and never gave up on their dreams. I hope that you too find inspiration in their strength and ability to stay strong, and not let rheumatoid arthritis stop their lives.

I was shocked to learn that my favorite celebrity and comedienne of all time, Lucille Ball, was diagnosed with rheumatoid arthritis at the young age of 17! Miss Ball had an extremely severe case of pneumonia as a teenager, and shortly after her recovery, she began to experience extreme pain in her knees and legs. At the time of her bout with pneumonia, she was working as a model for Hattie Carnegie’s famous dress shop. She had to stop her modeling career for a short time because she couldn’t stand longer than a few minutes at a time. She battled chronic RA pain on and off for the rest of her life, and was referred to many orthopedic surgeons. She went so far as to try and take “horse serum shots”, and even wore orthopedic shoes most days of the week. Despite her chronic pain, she pushed herself and refused to give up on her dreams of being a successful actress and comedienne. Her story really inspired me to never give up hope, and helped me to realize that your dreams don’t need to end just because you have rheumatoid arthritis.

The famous french painter Renoir, whose beautiful artwork adorns many museums, had an extremely severe and crippling case of RA that he suffered from for the last 30 years of his life. His case of rheumatoid arthritis began shortly after he suffered a massive heart attack in the year 1898. His disease progressed, and his joints became severely deformed. Within 5 years, this talented artist weighed a mere 105 pounds, and was confined to a wheelchair. Renoir was barely able to pick up a paintbrush, but still he continued to paint every single day of his life. Some of his most famous masterpieces were created when Renoir’s hands were completely deformed. How many people would actually continue to paint and live out there dream with crippled hands and severe pain? I know there are days when I don’t even want to go for a walk because I have pain in my hip. This was such an eye opener for me. This man had so much inner strength, and I truly admire him for it.

Dr. Christiaan Barnard was the very first doctor to perform a heart transplant surgery here in the United States, and also performed the first kidney transplant in his home country of South Africa. People around the world admired this man, and thought of him as a brilliant individual. Little did anyone know that this man was suffering from a severe case of rheumatoid arthritis in his hands. His hands were his greatest gift to the world; they were able to save people’s lives. Each day that passed, the pain was getting progressively worse. In 1983, this wonderful physician was forced to retire from being a surgeon due to the progression of his rheumatoid arthritis. Instead of giving up his career in medicine all together, he became the Scientist-In-Residence at Oklahoma Transplantation Institute in the United States. He spent the next few years consulting with other surgeons, passing on his knowledge to help further advance medicine. Let’s be honest here, most people would be so depressed that their career was over, that they would quit everything all together. Yes, it is true that he couldn’t operate on patients anymore, but that didn’t stop him from contributing to science, and from saving lives.

Remember everyone, you are not alone. There are many people that are plagued with RA. Some are rich and famous, some are brilliant doctors and artists, and some are blue collar workers just trying to make ends meet. No matter who you are, or how severe your own personal RA case is, you have your own hopes and dreams for yourself. Never let this disease rob you of that. If one door closes, look for other opportunities and other doors opening. Don’t give up on who you are and what you want out of life.

Interested in becoming a writer for rachicks.com? We are looking for volunteers to keep the knowledge going to all our members. Interested individuals can email Niki by filling out the form below.