[Member Discussions and Questions] Laryngitis and Cough From Taking Humira for Rheumatoid Arthritis? 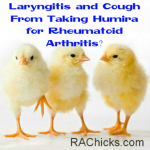 Has this happened to you while on Humira? A member message:

Going through major med changes after being on the same ones for years. Has anyone developed laryngitis and cough from taking Humira? I’ve only had two doses so far. First the laryngitis started and now the annoying cough. No cold, fever, chills or anything that would indicate I was sick. It has to be a side effect. Thanks for your input.

Have you experienced something similar to this after starting up on Humira? As always thank you for taking the time to help answer your fellow member’s message. It is greatly appreciated. (((pain-free internet hug)))

Vee – Respiratory reactions are listed as side effects. I live in a dirty building. I use saline nasal sprays to keep my nasal passages moist. I also use an antihistamine to control nasal drainage. This needs to be reported to your doctor for follow-up. These meds do reduce your immune system & you will get ill if exposed to anything. This time of year I become a hermit. Kids carry the germs & I end up bed bound.

Desi – Humira worked for about 3 months then it literally turned on me sending me into the biggest flare. I’ve been on Orencia for the past year and a half and it recently did the same thing so I’m considering my next medication change. I wish I could go off all meds and try the eating right/natural thing but that won’t stop the joint damage. I’ve had it 4 years so far and my joints are in no way to a point of needing surgery. However, I have an aggressive form so I’m sure in 20 years it may not be the same story. Hopefully the proper meds will delay it longer than that. I so wish they would find a cure for this mess.

Kim – OMG! Just took my second shot Saturday and today I have a cough and I’m losing my voice! How strange is that?!

Sandi – I had real problems with Humira. It caused my parotid glands to swell, My throat hurt and my eyes became so dry it was unbearable. Every time I took the shot I was in for a rough time for the next week. Then the nerves in my face would hurt so bad, I couldn’t even touch my hair. It felt like a hot poker where ever I touched. It is now listed as an allergy on my profile.

Judy – Yip I get cough. Really dry. Worse at night

Tiffany – I’ve been on Humira since 2009 and haven’t had either of those unless I was sick with something else like a head cold or upper respiratory infection. But everyone is different. I did have to start taking Zyrtec d regularly since starting it too.

Lela – I’ve had a constant coughing and worsened sore throats too.

Tanya – I’ve been on Humira around 7 years. Runny nose. Dry cough. Bright light aversion. Seriously dry eyes- I now have plastic tear ducts which are a fantastic thing! But they can come out, so need replacing, like another commenter said, this time of year is hell! I have two gigs and have put off humira for nearly a week now so I don’t come down with something. People coughing and sneezing without covering their mouths! Drives me insane!

Brenda – Mine is the same as Teri after being on it for several years, I am just getting relief from a dry cough that lingered for about 3 weeks. Other than that I feel pretty good.

Sarah – Yes. Dry cough. Changed to enbrel and cough is getting better

Lindy – Dry cough for months.. its a normal side effect. get it checked out though, as humira can cause serious lung infections

Courtney –  I’ve noticed in humira that I get really bad heartburn. That sometimes causes me to cough and lose my voice.

Paula – When I first started I got a cough particularly right after the injection. It went away eventually as my body acclimated. I do not remember laryngitis but had some lung issues the first year. All is well now, especially my joints.

Melanie – My voice sometimes is hoarse but no cough.

Sarah – I had a very, very slight sore throat for the first few weeks but it went away. Also noticed my sinuses have been a little more congested than usual but nothing too bad. I’ve had incredibly itchy arms though, been taking Piriton every day, drives me insane. Otherwise seems to be working fairly well. I’ve been on it every fortnight for four months.

Lela – I’ve had an increase in coughing since I started Humira 3 years ago. But the benefits make up for it. Used to have horrible chronic migraines for 2 years before starting, they immediately ceased with Humira. So a dry cough is a welcome replacement.

Julie – I thought that was funny I’ve lived with migraines for over 20 years since I’ve been on Humira I haven’t had one ya!!!

Denise – Yes. I felt sick on the Humira and the enbrel. Now I take actemra which blocks the IL6. And I feel great.

Cheryl – I have been on that,Enbrel,now taking Orencia and I have a cough,annoying cough!..dry….haven’t got any colds,maybe it’s my immune system or allergic to something! I am taking Telfast tablets for my cough

Raven – Yes!! Ive been on humira plus other stuff for 2 years but last Xmas I began taking it every week! I lost my voice constantly!! It hasn’t been an issue since but it was out of the blue! Good luck!

Arline – I have been on Humira for many years, I have had a cough for many years, now I’m thinking it may be the Humira. I am going to as my doctor, I have blamed other medications.

Mary – While on humira I could not look at bright lights and had dreadful feelings in my head. I was afraid to keep using it.

Teri – I’ve been on humira for 4 years and only just recently developed an annoying dry cough (6 months maybe) I thought it was allergies … it gets worse at night. I literally have no idea if it’s connected to humira but it is odd. No cold or fever etc ..